It is, without any doubt, the world's toughest motor race. The legendary Dakar Rally consists of competitors from across the planet racing on motorcycles and quad bikes, as well as in trucks and purpose-built racecars. This year, the competitors raced across two South American countries, over more than 9,000 km / 5592 mi. In this race, an intrepid South African team competed amongst several teams for the fifth time. Despite facing against some of the giants in the automotive world, Toyota Gazoo Racing SA came back carrying a trophy.

"This isn’t a race that is won or lost by a single person or even a single crew," said Toyota Imperial Team Principal Glyn Hall after returning from South America. "It takes a dedicated team to run the cars, a talented driver and navigator to keep it all on track, and a massive network of technical partners and suppliers back home that all play a part in creating the best possible race vehicle in the first place."

The Toyota Hilux that took part in this year’s Dakar is essentially the fifth generation of Dakar Hilux built and developed by Toyota Motorsport at the Hallspeed facility in Barbeque Downs, near Kyalami in Midrand. During the team’s first foray on the Dakar four years earlier, Giniel de Villiers and German navigator Dirk von Zitzewitz amazingly ranked third place overall. The next year they did one better by claiming second overall, before attaining fourth place the year after. They followed this up with another second place finish, and added to the tally with a stunning third place position during this year's edition.

"This year we had a fantastic race," said De Villiers after finishing his 13th Dakar. "We just couldn’t catch Nasser (Al-Attiyah in a MINI), but this Toyota Hilux is by far the best of the Hilux attempts so far. We were right there in the thick of it, and on the Dakar, that’s saying a lot."

According to Glyn Hall, effective filtration plays a key roll in the design of any race vehicle: "Essentially we want maximum airflow through the smallest, most effective air filter possible. And this goes for our Dakar vehicles, rally cars and cross country bakkies too."

To achieve this the filter housing must be compact and simple, yet totally reliable in terms of dust leakage. As with anything in motorsport, it needs to be easy to access, so that filters can be changed very quickly if needed.

In addition, thanks to the varied terrain encountered on the Dakar as well as the local races, the filters must also be able to cope with small amounts of water without damaging the integrity of the filter itself. The housings have to make provision to drain or dissipate the water quickly, so that the filter itself can return to maximum efficiency in the shortest possible time.

This year's Dakar happened to be one of the wettest events on record, with floods causing the cancellation of more than one section of the race. During the first week in the lowlands of Argentina, the race vehicles were forced to race in extremely wet conditions.

To make matters even more challenging, the filters used on the Dakar this year also had to cope with extended periods of exposure to extreme amounts of dust, without compromising on either filtration or airflow. As much as a cup full of dust can come out of an air filter at the end of a stage on the Dakar, yet the Donaldson filters employed this year showed no measurable degradation in terms pressure throughput.

"We measure the air pressure on each stage of the race," explained Hall. "This year we couldn’t detect any pressure drops during the race, despite some of the most varied conditions we have yet encountered."

For last year's Dakar, Toyota elected to move to the new PowerCore® range of Donaldson filtration products, and employed them again this year. The original decision was mainly due to space limitations, which did not allow the use of a more traditional cyclonic filtration system. As a result the team relied completely on the new filter alone, and achieved better-than-expected results throughout the two races.

However, it is not all about air when it comes to filtration. Toyota Motorsport also uses Donaldson fuel filters in their race vehicles, and where direct fuel injection is used, clean fuel is of the utmost importance. Due to the nature of off-road racing and rallying, the service areas are often dusty places where swapping out fuel filters pose a risk. Because of this, the team relies on Donaldson to supply filters that are able to last a long time, yet offer enough capacity to filter out any contaminants along the way. 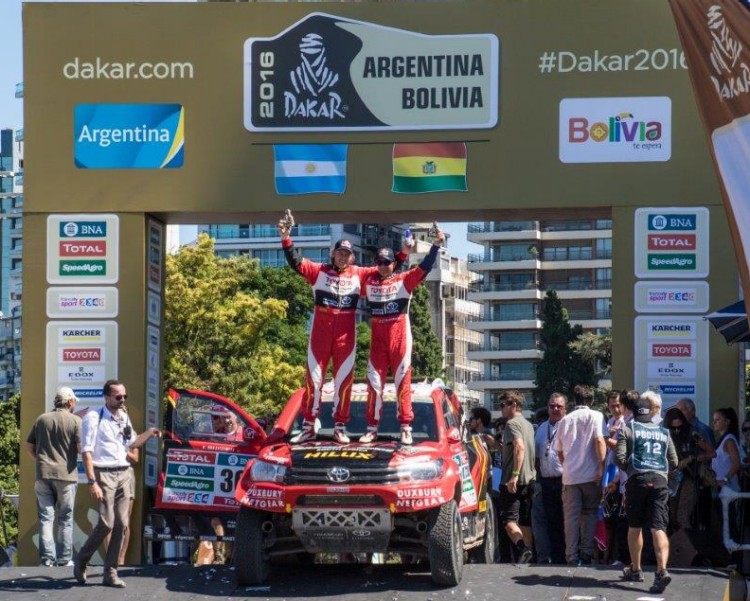 The team also uses hydraulic filters supplied by Donaldson, both for the steering system—and in the case of the Dakar Toyota Hilux—also on the hydraulic jacks that can lift the vehicle for quick tire changes.

All of this technology played a part in this year's Toyota Dakar effort; judging by the team's success, it is clear that Donaldson filtration systems delivered throughout the entire race. When the local racing season comes around, Dakar may still be fresh in everyone’s memory; however the reality is that the motorsport circus never really stops.

For Toyota SA Motors it is a point of pride that a South African team took on the giants of the Dakar and came away with a podium finish. It was a great result, not only for the company and its Dakar sponsors, but for the country as a a whole. For Donaldson, the chance to partner with the successful team was an opportunity not only to showcase its technical abilities, but also to prove how effective its products are by deploying them on the toughest motor race in the world.