SRZ Racing is a “Supertruck” racing team located in New South Wales, Australia. SRZ has raced in Australia and New Zealand since 1989 and has experienced mixed success in its races on the Australian National Truck Racing Organization (ANTRO) circuit. Like all racing teams, SRZ continually strives to get better and win more races. So when Brett Howe of Donaldson Australasia approached SRZ with some ideas as to how Donaldson could help the team improve the performance of its racing trucks, SRZ was all ears.

When Howe first approached SRZ, the team had no idea that Donaldson offered such a wide variety of products that could help improve racing performance. As Howe and the team walked around the SRZ racing truck, he pointed out that Donaldson manufactures high-performance air filters, breather systems for differentials, transmission filtration, engine oil filters, oil cooler filters, braking breather systems, diesel fuel filtration systems, as well as high-temperature wrapping materials that could boost the performance of the truck’s exhaust system.

The SRZ truck weighs 5 tons and has a 1,250hp engine (as compared to a typical over-the-road truck engine with about 400hp). The stresses and strains an SRZ racing truck faces in one lap on the circuit are equivalent to more than 1,200 miles (2,000 km) of over-the-road driving. Supertruck races are usually six laps, so you can imagine how tough the trucks have to be just to finish a race, let alone win one. It’s the equivalent of driving from Sydney to Los Angeles!

As a Donaldson expert, Howe is just as concerned with overall problem solving as he is with providing high-quality filtration products. The conversations with SRZ revealed that the team had recently been having problems finishing races due to mechanical engine failures. During his investigation, Howe discovered that the diesel fuel SRZ was putting into its racing trucks often came out of uncovered 44-gallon drums. Thus, it was very likely that the diesel fuel going into SRZ’s high-performance engines was severely contaminated with dirt and water, both of which are known to cause significant fuel system performance problems and failures.

"We haven’t changed a lot. But we put Donaldson on and we are now 1.5 seconds per lap quicker."

To win more consistently, SRZ needed to up their game. They needed more durability from their truck engines, an increase in power and more speed. They knew that their driver, Stephen Zammit, was among the best on the circuit, and to utilize his skills completely, they needed equipment to perform at its best. SRZ’s ultimate goal was to win both the Trans-Tasman Truck Racing Championship and the Australian Super Truck Championship in the same year, a feat that had never before been accomplished in the history of ANTRO.

As Howe puts it, SRZ went all-in and “fitted it all up.” The team implemented all of Donaldson’s recommendations for achieving better performance. SRZ installed new Donaldson Blue filters, transmission filters, engine oil filters, breathers and bulk diesel fuel filtration systems that cleaned the fuel entering SRZ’s trucks for optimal performance, even under the punishing conditions of Super Truck Racing.

The Donaldson products and filtration systems were installed before the 2013 racing season, and SRZ was very pleased with the results. 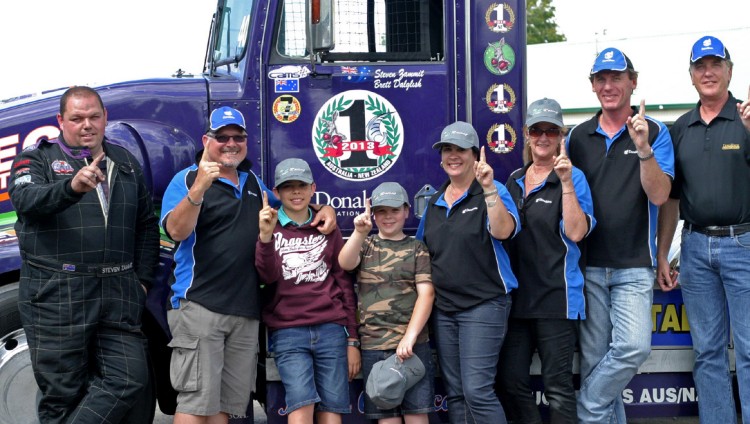 SRZ’s competitors, while at first skeptical about the team’s new tactics, were impressed by the team’s results, and at least four have contacted Donaldson to discuss how they too can achieve more using Donaldson’s line of products and expertise. On this competitive yet friendly racing circuit, secrets don’t stay secret for long!