Problem: Without a careful double-filtering process, a series of bacteria can negatively affect the quality, flavor, character, and aroma of the bottled wine.

Solution: Donaldson's LifeTec™ filter elements have 20% more media than comparable filters and have a sturdy triangular design to withstand twisting and to stay intact under high flow rates.

Wineries Advised to Use Two-Step Process

In the art of winemaking, it’s not only what’s in the bottle that matters. It’s what isn’t. Winemaking consultants say the wrong micro-organisms can be disastrous if they sneak into final bottling. For example, acetobacter will convert wine to vinegar, and any residual yeast that remains after fermentation can cause re-fermentation in wines with residual sugar, producing unintended carbonation.

“If a volume of wine has any residual sugar—and you’re not very diligent about removing all of the bacteria, and more importantly, the yeast cells—the wine can re-ferment in the bottle,” says Drew Horton, Enology Specialist at the University of Minnesota, and a consultant to wineries across the Upper Midwest. “It’s a disaster because it causes the wine to get bubbly or cloudy, or the cork pushes up, or in the worst scenario, the bottles start exploding in the bottle shop.”

Horton strongly recommends vintners learn proper filtration techniques. Unless a wine contains no residual sugar and the winery is absolutely sterile, he advocates a double-filtering process. The wineries that don’t conduct this practice, he says, are very rare.

“If a wine label says it’s unfiltered, the winery is guaranteeing they’re using the best clean fruit, their processing standards are extremely high, there’s no residual sugar in the wine, and most of the malic acid has been converted to lactic acid,” says Horton. “Then the winemaker may choose to bottle the wine without any filtration.”

Established wineries are veterans in filtering. But in regions where the industry is younger, the learning curve for small operators with less experience can be steep. Horton says many vintners use only “nominal” filtering, and are unaware of the need for the second “absolute” step.

“If the wine is not properly prepared and filtered when it goes into the bottle,” he says, “there are a series of bacteria that can negatively affect the quality, the flavor, the character, the aroma of the bottled wine.”

Dry or off-dry white varietals of most respected wineries have less than two percent residual sugar— many have less than one percent, the industry’s definition of “dry.” By contrast, wines with three to five percent residual sugar are common in many northern states with large rural populations, where people tend to prefer sweeter wines, and where vintners need to compensate for high acid in shortseason grapes.

"That's why wineries tend to be sticklers about filtration."

The residual sugar is a very important blend component, but any yeast that lingers after it’s done its job will have a chance of interacting with the product even after six or nine months after bottling.

That’s why wineries need to be sticklers about filtration. Periodically throughout the production year—after the wine has been oak-aged and cold stabilized—many vintners practice the two-step method Horton recommends. First, they batchfilter the wine through a nominal “depth” filter to remove 95 to 98 percent of all yeast and other target organisms, which range between 0.6 and 0.8 microns in size. Then, if they add balancing sugar, they batchfilter the wine once more through a final absolute “membrane” filter. Its pores are also 0.45 micron, but its thin, PES (polyethersulfone) membrane captures the last two to five percent of any remaining contaminant that a nominal filter sheet can miss. 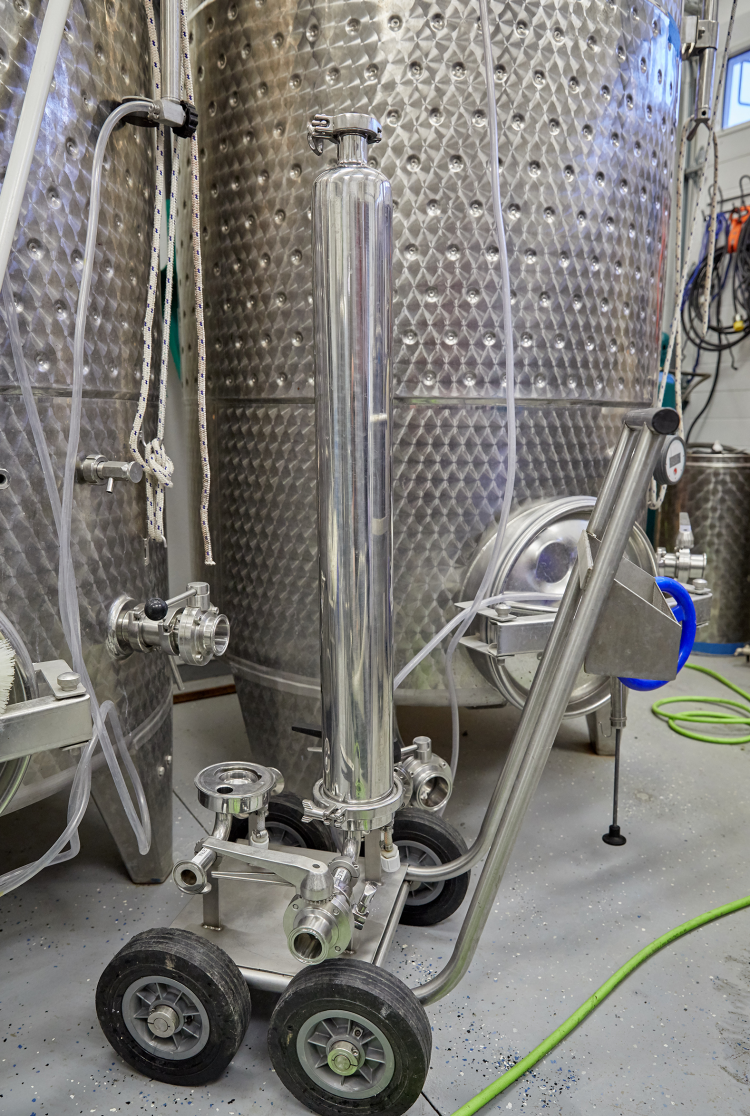 For many years in Europe, membrane filters made by Donaldson Company, headquartered in Minnesota, have been used in winemaking. Now the filtration company’s new LifeTec Absolute Filter is serving that market—and is starting to make inroads into the U.S. winemaking market, as well. The LifeTec filter elements have 20 percent more media than comparable filters, have a sturdy triangular design to withstand twisting and to stay intact under high flow rates. Donaldson developed the technology in cooperation with some of the largest beverage companies in the world, with household brand names.

“The target organisms are always different, depending on the application,” says Colter Marcks, Lead Engineer for Process Filtration at Donaldson.

“In beer, it’s not so much making sure the yeast is gone; it’s making sure that spoilage organisms aren’t taking hold. You’ve got this really sweet solution that could be a good food source for a lot of different organisms and it’s really critical to exclude any contaminant organism and allow only the desirable one.”

The LifeTec filter is built to remove organisms in one filtration step. But the pre-filtration, says Horton, is all about saving costs.

“In nominal filtration, you may use from 12 to 80 filter sheets, depending on volume of wine and rate of flow, and they cost $1 or $2,” he says. “Whereas, the absolute filter cartridges can be $300. If they plug frequently, you’ll be wasting a lot of money. Like any tool, the less you ask of it, the longer it’s going to last.

Marcks agrees that two filter steps are better than one. “Filter one is capturing the bulk of the contaminant and making sure that final one doesn’t get blocked up as quickly,” he says. “Because a membrane filter is more expensive, you try to do most of the work with the first one.”

"While careful two-step filtration and testing sounds like a lot of bother, doing without it can quickly rack up time and costs."

A LifeTec filter is designed to save costs over time, says Marcks, because it’s reusable and its strong cage structure is made to withstand the rigors of steam sterilization. Still, Horton recommends that all membrane filters be carefully monitored for leaks.

“It’s possible to push clean wine through a membrane filter, and somehow, whether it’s the amount of pressure or the amount of dirt in a wine, you can breach a membrane,” says Horton. “You absolutely have to test a membrane filter before and after you use it. If you’re really thorough, you send the wine out to a microbiology lab and they’ll either plate the wine in petri dishes.”

After 20 years of working in wineries, Horton says filtering is no place to scrimp. While careful twostep filtration and testing sounds like a lot of bother, doing without it can quickly rack up time and costs.

“Once you’ve worked in a winery, and 200 cases of wine are either cloudy or re-fermenting and you have to pull in a crew of extra people to pull every cork, dump the wine back into a tank and restabilize, refilter, and rebottle them,” he recalls, “Once you do that one time, you swear you’ll never let it happen again.”

At wineries across northern states this summer, wine tasters may give little thought to the filtration taking place behind the scenes. But winery owners know process filters are an important part of their success by making the most of northern-climate fruit.

Contact Us
Important Notice
Many factors beyond the control of Donaldson can affect the use and performance of Donaldson products in a particular application, including the conditions under which the product is used. Since these factors are uniquely within the user's knowledge and control, it is essential the user evaluate the products to determine whether the product is fit for the particular purpose and suitable for the user's application. All products, specifications, availability and data are subject to change without notice, and may vary by region or country.
Close