Problem: Moisture from humidity and tropical rain causes high dP and the carryover of any captured particulate past the filters into the turbine, resulting in 3-5% compressor efficiency losses and 15-20% power losses. 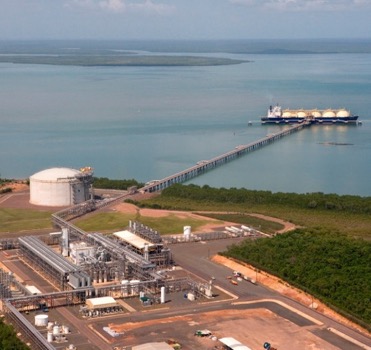 A liquid natural gas (LNG) plant in a tropical climate has had four years of success with watertight air filtration from Donaldson Gas Turbine Systems. This case study is applicable to other humid, tropical, and coastal oil refineries and power plants that struggle with moisture and airborne contaminants.

The LNG plant featured in this case study is connected via a subsea pipeline to offshore export facilities in the Timor Sea. Owned by a major global oil and gas company, it uses six GE LM2500 G4 engines with two turbines for propane refrigeration, two for ethylene refrigeration, and two for methane refrigeration.

The facility’s six turbine engines require a total of 720 filter element pairs to filter airborne contaminants and to provide clean intake air. The tropical climate of this coastal location has posed serious filtration challenges. In summer months, there is 80% relative humidity, tropical rain, and salt laden air. In the dry winter season, heavy smoke and ash from area brush fires also contaminate the air. The carry-over of moisture tends to bring particulates that can cause blade fouling and premature equipment wear.

In 2014, the LNG plant was using premium synthetic F9 MERV 15 filters. This air filtration technology was state-of the art in the turbine industry at that time. Although the elements were performing more effectively than previous blended F9 MERV 15 filters, in regard to differential pressure (dP) and filter life, the turbines still encountered performance issues.

“The filters were loading with soot particulates,” said the facility’s Principal Rotating Equipment Engineer. “A lot of those contaminants were making it past the filter and sticking onto our axial compressor blades, because they’re sub-micron in size.”

A differential pressure increase and a reduction in axial compressor efficiency indicated that significant moisture still penetrated the filters and with it, contaminants including soot, smoke, and salt. This caused blade fouling—a mechanical imbalance that triggered a loss of efficiency in the axial compressor. Efficiency losses at the facility ranged from 3% to 5% over 12 months, which translated into a measurable power loss.

“The biggest issue around humidity was the fact that we lost power because of the high wet-bulb temperature,” the engineer explained. “Our plant throughput was already impaired by 15% to 20% in humid weather, which meant any additional impairment due to filter differential pressure (dP) added to the problem. 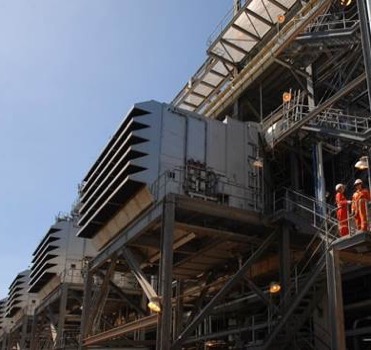 We got to a point where we either took the top case off the turbines and hand-cleaned the blades or took them down for repair.”

However, the water-washes were only a temporary fix for power degradation. Each wash restored partial power, but there were diminishing returns with each wash cycle. Consequently, at 18 months, the 720 filter pairs could no longer support adequate power production and required replacements.

To address these challenges, in 2015 the LNG plant decided to trial the new Donaldson watertight (H)EPAgrade Turbo-Tek Er5 | W5 | P1 media. The customer installed Turbo-Tek Er5 | W5 | P1 filters into four of the six LNG turbines, and kept the existing F9 technology in the other two for their own side-by-side performance comparison.

After nine months, the change yielded a significant improvement in turbine protection, indicated by dP and compressor efficiency data for the turbines running the watertight filters. dP remained stable through the summer months and over the life of the filter, with almost no loss in axial compressor efficiency. 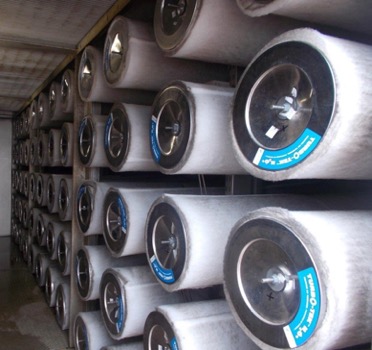 Despite bushfire soot build-up at 6,000 hours, there was little to no spike in differential pressure or blade health.

Based on the trial, the LNG plant decided to convert all six turbines to the watertight (H)EPA Turbo-Tek Er5 | W5 | P1 filters — and since made the change at its other LNG facilities.

By late 2019, four years later, after the trial, all Turbo-Tek Er5 | W5 | P1 filters at the LNG plant maintained their original performance. The engines have sustained nearly 0% losses in axial compressor efficiency, and the plant has eliminated online water-washes.

Remarkably, as of December 2019, the plant was still using its original TurboTek Er5 | W5 | P1 filters, installed in 2015, with just one pre-filter wrap change at 36 months to reduce a minor increase in dP. The plant has extended its filter life from 18 months to 48 months, resulting in substantial savings in filter and maintenance costs. 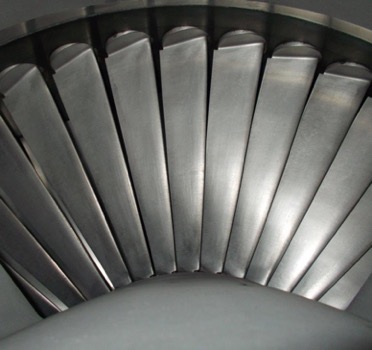 “The move from F9 Spider-Web XP filters to the E12 Turbo-Tek Er5 | W5 | P1 watertight filters has made an extraordinary difference to our operation in that we’re not losing efficiency on our compressor now, and we don’t have to come down to wash,” said the engineer. “The cleaner we can keep our turbines through the wet season, the better we can sustain our production. The filters are keeping the axial compressor very clean and a bonus is that the filters are actually lasting a long time, which is quite extraordinary. So all-in-all, we’re pleased with the results. The return on our investment in Turbo-Tek Er5 | W5 | P1 watertight filters definitely makes sense.”

Selecting filtration solutions based on a variety of conditions can help support effective and efficient operations. To help plant owners with filter selection, in 2018 Donaldson introduced the Er | W | P rating system for its line of Turbo-Tek gas turbine filters. Using the industry’s first laboratory tests for watertightness and pulsability, Donaldson now rates each filter type on a 0 to 5-point scale for three characteristics:

The filter discussed in this case study has a rating of Er5 | W5 | P1. This means they have the highest capture efficiency (Er5), the highest watertight rating (W5) and, since they are depth-loading filters, they have low pulsability (P1) on Donaldson’s Turbo-Tek line of gas turbine filters. 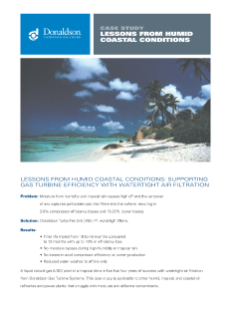