MINNEAPOLIS (19 June 2017) – Workshops for Warriors, an advanced manufacturing training program for military veterans in San Diego, California, has tripled its welding capacity, thanks in part to a donated ventilation system coordinated by Donaldson Company.

In 2014, Donaldson donated and planned installation for a Torit® Downflo™ dust collector, asking its suppliers to contribute other equipment for a complete dust and fume solution. The safer environment has enabled Workshops for Warriors to expand its welding stations from six to 18, and will support 60 booths under a planned expansion. In 2015, the American Welding Society named Workshops for Warriors the best welding school in America.

“Besides having the world’s best ventilation system, the other donations have been game-changing,” says Hernán Luis y Prado, founder and CEO of Workshops for Warriors. “We now have more installed welding booths on the West Coast than the U.S. Navy, the Marine Corps, British Aerospace and Engineering Systems, and General Dynamics combined—and that’s only possible because of Donaldson.”

Workshops for Warriors provides free, accredited skills training to an average of 50 wounded or transitioning service members every semester, and over 500 Veterans seek enrollment in the program every semester. The welding and advanced machining classes run 12 hours a day six days a week, enabling graduates to earn nationally recognized, portable credentials in just four months. 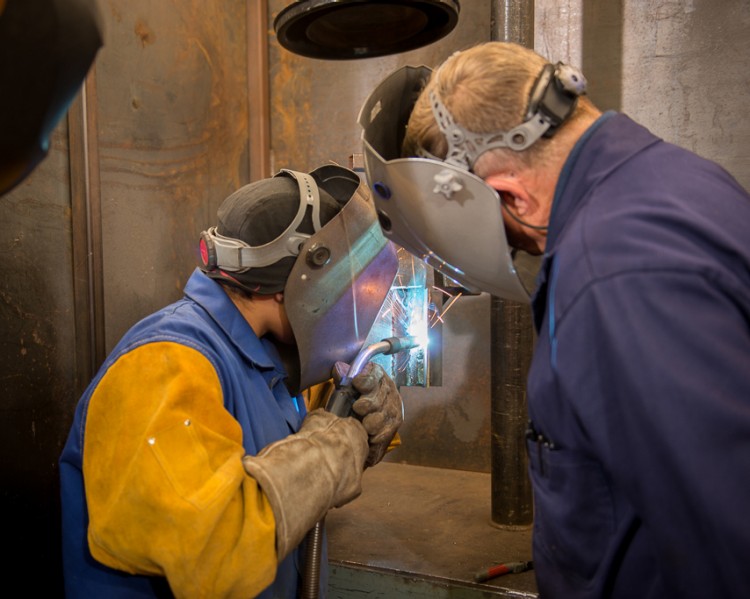 “We’re teaching tomorrow’s technology today,” says Luis y Prado, a former Navy officer whose concern for the prevalence of drug addiction, suicide, and homelessness among veterans drove him to start the job-training program in 2008. “With these credentials, transitioning veterans have a path to financial freedom so they can go anywhere in the world and have a steady job with lifelong career progression.”

“It was not a healthy work environment,” says Thomas. “Hexavalent chrome is a known carcinogen produced when stainless steel is welded. And there are OSHA standards for other respirable fine particles. The school clearly needed fume control to be recognized by welding associations.”

Luis y Prado says the problem was also hampering the scope of training.

“We had a big fan that blew air. That was it,” he says. “We could only teach beginning-level welding, and not very often because the place would get smoked out. We weren’t able to give the students the experience required for jobs that are industry-standard.”

At the recommendation of Thomas and Walters, Donaldson executives agreed to donate a Torit® Downflo™ dust collector, a high-efficiency model that produces cleaner air with up to twice the filter life—important for a non-profit trying to keep a lid on maintenance expenses.

Over the next six months, Walters, an Army veteran himself, made many trips to Workshops for Warriors, drawing plans for a system that would not only solve the immediate hazard, but grow with the program.

“We needed to factor in the number of welding stations they would eventually have, what kind of ducting that required, the ducting lay-out, and a place outside to locate the collector,” says Walters. “Our motivation was seeing what these veterans—some with lost legs or arms—were dealing with as they tried to recoup a life that was functional.”

But the system called for other components beyond the Downflo collector, so Walters worked his connections in the industry. Donaldson vendors supplied the ductwork and control panel. Blender Products, Inc. provided a Spark Cooler® for spark abatement. And New York Blower supplied the fan free of charge. Reliance Steel & Aluminum even agreed to contribute steel. Altogether, Walters puts the total value of the donated system at more than $140,000.

“We were really lucky to get Bob as a champion for us with his knowledge of the technical issues. He was a catalyst for other companies to get involved,” says Luis y Prado. “Now our students don’t have to worry about safety as they’re training for a career. In fact, the Donaldson ventilation system has an incredible bandwidth, so we’re drawing over twice the fumes that are required at the welding surface. There’s no way we could have afforded to buy that level of equipment.”

Workshops for Warriors is in a capital campaign to quadruple its capacity from 120 to at least 450 students a year, and hopes to expand to locations across the United States once its application for GI Bill funding is approved, projected for 2019. Luis y Prado says the training addresses a serious skills gap in U.S. manufacturing.

“We’re at the cusp of a perfect storm,” says Luis y Prado. “One million veterans leave the service every five years, and a projected 2.3 million advanced manufacturing jobs will go unfilled in the U.S. over the next decade due to lack of skilled labor‡. We’re setting out to rebuild American manufacturing, one veteran at a time."' Participating in that mission has been gratifying for Donaldson, and Thomas and Walters in particular.

“It’s a special feeling to know you played a small part in helping others,” says Thomas. “The process opened my own eyes to the sheer number of veterans who have contributed to our country and come back without the necessary skills to move into the workforce. Playing a small role in correcting that has been rewarding.”

‡ “The Skills Gap in U.S. Manufacturing: 2015 and Beyond” a study by Deloitte for the Manufacturing Institute