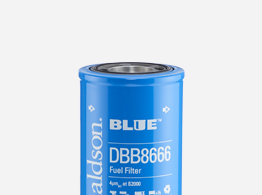 We offer diesel fuel and oil filtration systems designed to increase equipment performance and longevity by removing harmful contaminants.
Did You Know?