Dirty fuel can cause premature failure in equipment of any age. Because of the extremely high pressures, this damage is even more pronounced in newer equipment with High-pressure Common Rail (HPCR) fuel systems. Hard particulate is commonly referred to as "dirt", but is often made up of a wide variety of materials found at job sites (coal, iron, salt, etc.), generated by fuel tanks and lines (rust, corrosion, etc.) and inside engines (carbonatious materials and wear particles).

The spray pattern generated by the HPCR injector is critical for proper combustion and overall fuel system performance. It must be extremely precise in terms of quantity, distribution and timing. Ball seat valves are sealed with balls that are only 1mm in diameter. A good seal is absolutely necessary for proper injection. Damage from erosive wear, will cause over fueling, leading to decreased fuel efficiency and could eventually lead to downtime.

Pump performance can also be compromised by scoring and abrasive wear. These issues are magnified by the tighter tolerances and extreme pressures in HPCR engines. In these circumstances, it is the smallest particles (1-5 microns in size) that cause the most damage, virtually sand blasting part surfaces.

In some parts of the world, 10,000 gallons (38,000 liters) of “typical” diesel contains 1-1/2 lbs (700 grams) of hard particulate; this is 1,000 times more than the 1/4 oz. (0.7 grams) per 10,000 gallons (38,000 liters) that is allowed by the cleanliness requirements of HPCR fuel systems. In reality, there is no "OK" level of hard particulate. Injector manufacturers are very clear that damage caused by hard particulate reaching the engine is not a factory defect, but rather the result of dirty diesel that is not fit for use in HPCR fuel systems. At the end of the day, the end user is responsible for the fuel put into equipment, and the consequences thereof.

How Does Dirt Get into Fuel?

Dust and dirt are all around us, especially on job sites. Diesel fuel is fairly clean when it leaves the refinery, but becomes contaminated each time it is transferred or stored. Below you will find some of the key contributors of fuel contamination:

Pipelines: Most pipelines are not new, and certainly not in pristine condition. Corrosion inhibitors are added at most refineries to help protect pipelines, but rust and other hard particulate is nevertheless picked up by the fuel that flows through them.

Barges and rail cars: How often are they drained and scrubbed out? What was in the last load? Where did it come from? How much of it was still in the tank when your load was picked up? How long was it in transit? Is the tank hermetically sealed? There are lots of opportunities for contaminant to make their way into the fuel.

Terminal tanks: Terminal tanks usually see a high rate of turnover, so there is not much time for the fuel to pick-up contamination from outside ingress. Has the tank ever received a "bad load" from a pipeline or a barge? Has larger dirt had a chance to settle on the bottom of the tank? How often has it been cleaned out? Was it just filled? Did the bottom get churned up in the process? How full was the tank when your fuel was loaded into the delivery truck? There are many variables that can affect fuel cleanliness. 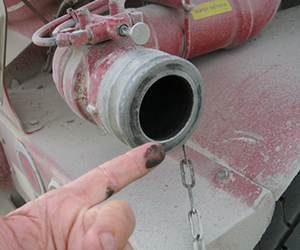 Delivery trucks: All the same issues that apply to stationary tanks also apply to tanker trucks, except that truck tanks never get a chance to settle. In addition, have you ever considered how much dirt gets into that tanker while it is delivering fuel to a customer, potentially a customer in an extremely dusty environment? As fuel flows out, air is sucked in to displace it. Is there anything protecting the inside of the tank from all the dust in the air? Generally, not. Venting is typically completely unprotected, as seen in the image to the right.

Dispensing process: How far does your diesel need to travel between the bulk tank and the dispenser? The more pipe it runs though, the more potential there is for contamination. Are your dispenser nozzles kept clean? Are they ever dropped on the ground? Then what? What about the vehicles' fuel tank inlets, are they clean? Think about the extremely tight tolerances in your fuel system, then take another look at housekeeping issues. You will see them through new eyes.

Onboard fuel tanks: Contamination continues even after the fuel is in the equipment. What has that tank seen in the past? Has it been left stagnant for long periods? What kind of protection is there on the equipment's air intake vents? Heavy equipment does hard, dirty work.

Engines: Unfortunately, even if the fuel in your tank could be perfect, additional contamination is generated by the fuel system itself. Wear particles are created by mechanical friction. High heat and extreme pressure generated inside the modern engine, lead to coking and the creation of carbon products at the injector. Much of this internally produced particulate is returned to the fuel tank along with the unburned diesel.

If hard particulate is damaging your equipment or rapidly clogging your filters, the first thing to do is to isolate the problem by testing the cleanliness of your fuel at each critical point: at delivery, inside your bulk tank, and at the dispenser. This will help you prioritize the action steps that will improve your fuel quality the most: cleaning fuel before it is delivered, improving tank conditions, installing filtration your dispensers, or other.

If your diesel is delivered dirtier than it should be, then there is a conversation to be had with your supplier. Most likely, however, your fuel deliveries are perfectly compliant with diesel industry specifications, so the distributor is probably not doing anything “wrong”. That said, handling practices are very important. Diesel quality can vary greatly supplier to supplier depending on how well their operation is run. A good supplier adds a lot of value. Purchasing decisions based solely on price are seriously discouraged. The cost of a bad load is far greater than the few pennies per gallon or liter that might be saved by bargain shopping. If you play the "diesel lottery", sooner or later, you will lose. High volume diesel users may be able to set their own requirements and convince the distributor to install filtration at his terminal or on the delivery truck, but for most this is not a viable option. It is up to you to ensure that your fuel is cleaned to the level required by your equipment. The average cleanliness of delivered fuel varies greatly depending on region.

Testing is the only way to accurately assess the cleanliness of your diesel. Any reputable oil analysis test lab can do this for you, or you can easily monitor it yourself with a manual particle count patch test kit and USB microscope. 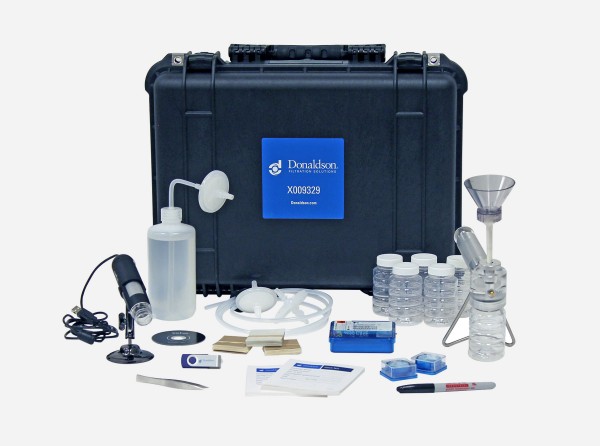 The Donaldson Patch Test kit allows you to conduct on-site particulate analysis in as little as ten minutes. Fluid analysis provides a snapshot of what is happening inside your equipment.

Clean Your Fuel Before Taking Possession of It

Install a high efficiency single pass filtration system at the inlet to your bulk tank to clean fuel down to recommended cleanliness levels. This not only protects your equipment, it also protects your existing diesel investment and your tank from the risk of receiving a bad load of fuel. A good tank cleaning is expensive and time consuming.

Protect the Diesel Investment in Your Tank

Work sites tend to be dirty places, and fuel continues to be contaminated each time it is transferred or stored. The task at hand is to prevent additional dirt from getting into the diesel after it is in your bulk tank. This is something every fuel user can and should take steps to control. Dirt can get into your bulk or onboard fuel tank upon delivery, from the air, from the tank, or from direct contact. This can be prevented or minimized by good handling practices.

Kidney loop filtration with a portable filter cart is another option for cleaning up tank contents. It is especially suitable for smaller diesel volumes. Make sure that the tank level is low before kidney looping. This isolates the contaminants concentrated at the tank bottom and does not mix them up with large volumes of cleaner fuel on top.

Because unstable fluids and the tank itself can be sources of contamination, final filtration at the dispenser is recommended. This is the most critical place to filter. It ensures that only clean, dry fuel reaches your valuable equipment. Depending on flow rate and total diesel usage, dispensing filtration can be as simple as a single filter mounted on your fuel pump. Installations can be scaled to handle any fuel flow, from a single low flow pump to a high-volume commercial terminal.

Not all diesel filters are created equal. Some remove only "rocks and sticks", while others remove over 99.9% of all contaminant down to the size of a single cell of bacteria. It is important to use a filter that will clean diesel to recommended levels. To accomplish this, the bulk filter should be just as efficient as the onboard secondary fuel filter specified by the manufacturer of your equipment. Numbers of particles and total contamination amounts increase dramatically at smaller particle sizes under 4 microns. If you are not filtering out particles of this size at a high efficiency rate, then you are doing little to protect your equipment or extend the life of your onboard filters. No matter which filter you select, testing your fuel is the only way to know for sure that it is clean enough.

With the introduction of HPCR fuel systems, the demands on onboard filtration increased exponentially. Helping out the onboard filters is one reason that bulk filtration prior to fueling is recommended. It will extend onboard filter life significantly while adding an extra layer of insurance to ensure your entire fuel system meets expected parts life and scheduled service intervals.

Filters are now expected to remove much more contamination in terms of particle size, efficiency (percentage) and total volume. High tech synthetic medias do a very good job of both cleaning better and holding more than ever before. But just because a filter will "fit" on a particular application does not mean that it is up to the original manufacturer specification. Cross referencing does not necessarily mean equal performance.

Follow equipment manufacturer specifications and be sure to check the Beta Ratio (efficiency) of a filter, not just the micron size. A "10 micron" filter that only removes half (Beta 5(c) = 2) of all particles 10 microns and larger is not at all the equal of a "10 micron" filter that removes 99.9% of all contaminant 10 microns and larger (Beta 10(c) = 1000). Donaldson fuel filters are proven to meet or exceed equipment manufacturer specifications. 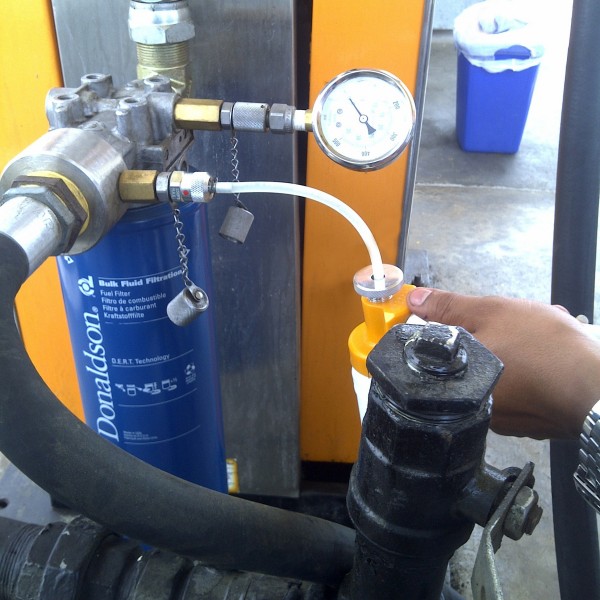 The way a sample is collected; the frequency, the accessories used and the procedures followed all dictate how informative the oil samples will be and, subsequently, dictates how beneficial the results will be.

Looking for a bulk filtration expert to custom size your system? 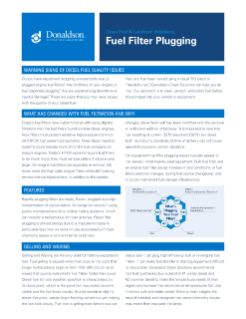 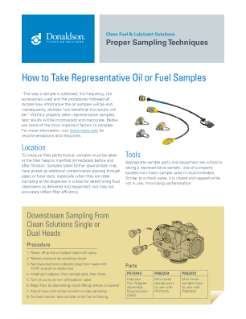